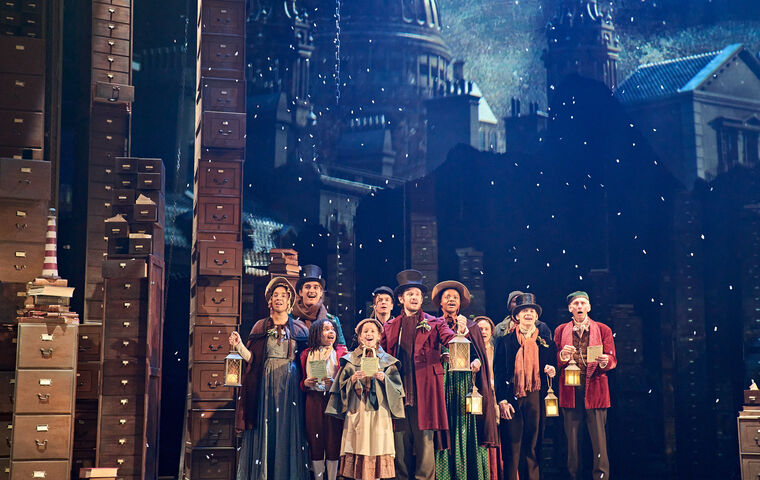 Planning a break for a day with your partner, then come and see a ghost story play live in action near you - an epic supernatural show. Book your tickets now!

The countdown to Christmas has officially begun! The tree is up, the wine is mulling. It wouldn’t be December without staying inside in front of the fire and watching a film. So here are our top 7 Christmas movies designed to get you in the mood. From angels on earth to dancing politicians; all-American heroes to a ghost story play, there’s something for everyone.

Family fun at its height, Jim Henson’s muppets get up to mischief in this retelling of Charles Dickens’s classic novel. Featuring all the usual characters join Kermit, Rizzo the Rat, Fozzie Bear and Miss Piggy as they journey through Victorian London on a mission to introduce a young audience to Dickens’s ghostly tale of redemption.

If you’re up for a supernatural show of the live-action variety, ‘A Christmas Carol – a ghost story’ plays in London at Alexandra Palace until 9th January 2022.

Starring Mark Gatiss (Sherlock, Dr Who) the ghost adventures experienced by Scrooge take on a new twist as this new adaptation revives the supernatural element which will make the hairs on the back of your next stand up  – a truly thrilling play.

Nothing brings on a festive debate quite like arguing with the family as to whether Bruce Willis racing to save hostages from the grip of a German terrorist is or isn’t a Christmas movie. Action-packed from the start, this is a much-loved story of an anti-hero’s fight for justice. And it is a Christmas movie by the way. So it’s on our list.

The Nutcracker and the Four Realms

The sumptuous retelling of the classic fairytale is an absolute must for our list. Spend time getting lost with Clara in magical lands as she searches for a special key which will unlock a gift given to her by her mother before she died. Expect vibrant costumes, dazzling dance routines and some familiar appearances from the Sugar Plum Fairy and of course the Nutcracker himself.

American comedy at its best, Elf tells the story of Buddy, a human raised by elves who decides to make the perilous journey to New York to find his real father. Deliciously silly and full of heart, it’s now a staple of many households festive family viewing. Will Ferrell, Zooey Deschanel and James Caan star.

An all-star cast and intertwining stories make Richard Curtis’s romp through the countdown to Christmas a modern favourite. From first love, to unrequited love, betrayed love and Hugh Grant throwing some serious dance shapes, this is the perfect movie for snuggling up on the sofa with your partner and feeling the festive romance. And no. We still haven’t forgiven Alan Rickman yet for *that* necklace.

Nope, we have NO idea how Kevin’s family made it all the way to Paris without noticing he’s missing. But we’re glad they did forget as otherwise we wouldn’t have the annual treat of sitting down to watch Kevin take on Harry and Marv, two loveable burglars with a nasty habit of trying to break into the McCallister household. Tricks and booby traps galore wrapped up in a bow.

When life takes a serious turn for the worse for small-town Bedford Falls resident George Bailey, the only option he thinks will fix it all would to be if he had never been born at all. Under the guidance of a trusty angel Clarence, George is shown what his life would have been. Frank Capra’s life-affirming tale is not just one of the best Christmas films, but one of the best films of all time.

So there you have it! 7 recommendations if you’re looking to embrace everything Christmassy – even if you have your very own Scrooge in your family, it’s hard to say ‘Bah humbug’ to any of these movies.

If you’re up for a supernatural show of the live-action variety, ‘A Christmas Carol – a ghost story’ plays in London at Alexandra Palace until 9th January 2022.