Beatriz, Fletcher, Buckley and Cowan to star in 2:22 in the West End 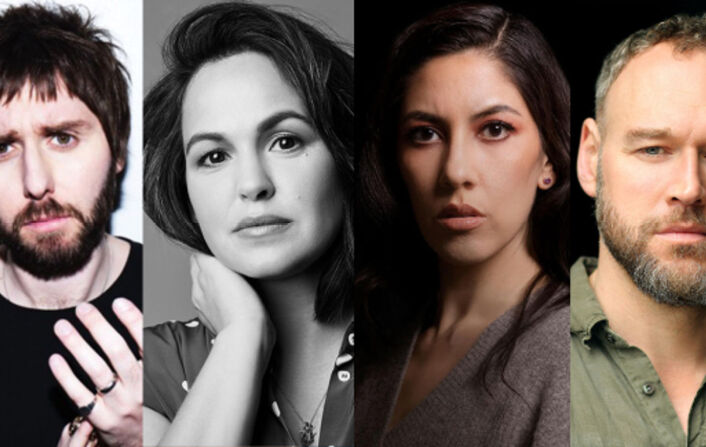 Producer Runaway Entertainment is delighted to announce the first casting news for the transfer of Danny Robins’ edge-of-your-seat, supernatural thriller 2:22 - A Ghost Story for a new season at the Gielgud Theatre.

Stephanie Beatriz will play the role of Lauren. Stephanie Beatriz stars as the lead character Mirabel in Disney’s forthcoming animated motion picture Encanto, coming to theatres November 24. Prior to that, Stephanie played Carla in the Warner Bros. feature In The Heights and the tough and loveable detective Rosa Diaz on the hit show Brooklyn Nine-Nine
Stephanie Beatriz said: “Hooked the moment I read 2:22. I was on the edge of my seat reading it, and I hope you will be too when you watch it! I am excited to be playing a Latinx American trying to make sense of this very unusual and intense London setting.”

James Buckley will play the role of Ben. James is an English stand-up comedian, actor, musician, YouTuber and streamer. He is best known for playing Jay Cartwright in the BAFTA-winning E4 sitcom The Inbetweeners.
James Buckley said: “I’m thrilled to be joining the cast of 2.22 and working with director Matthew Dunster on this brilliant play”.

Elliot Cowan will play the role of Sam. Elliot is an English actor, known for portraying Corporal Jem Poynton in Ultimate Force, Mr Darcy in Lost in Austen, and Ptolemy in the 2004 film Alexander. He also starred as Lorenzo de' Medici in Da Vinci's Demons and Daron-Vex in Krypton. Cowan most recently is known for playing King Henry Tudor in the STARZ series The Spanish Princess.

Giovanna Fletcher will play the role of Jenny. Giovanna is a Sunday Times bestselling author (her new novel Walking On Sunshine publishes 11.11.2021), actress, blogger, vlogger and presenter. Since 2019, she has presented the CBeebies series The Baby Club. She won series 20 of I'm a Celebrity...Get Me Out of Here!.
Giovanna Fletcher said: “I’m thrilled to be joining the cast of 2:22 A Ghost Story as Jenny. Reading the script the first time gave me chills - that feeling has increased in subsequent readings. It’s such an honour to be putting this play on its feet for a West End audience.”

Matthew Dunster said: "2:22 had an extraordinary effect on audiences. I’ve never experienced anything like it. They loved the play and the surprises in the casting. We now have a completely new cast - again full of rich surprises. I can't wait for audiences to find out who the new cast are and for us all to relish their new interpretation of the scary and funny phenomenon that is 2:22"

After breaking all box office records for a new play at the Noel Coward Theatre; described as the theatre event of the year and the hottest ticket in the West End; and after weeks of sell-out performances, the show will play at the Gielgud Theatre for ten weeks only until 12 February 2022.

2.22 - A Ghost Story is written by award-winning writer Danny Robins, creator of the hit BBC podcast The Battersea Poltergeist and it is directed by Matthew Dunster. Intriguing, funny and scary, it takes audiences into one adrenaline fueled night where secrets will emerge and ghosts may appear….What do you believe? And do you dare to discover the truth?

“There’s something in our house. I hear it every night, at the same time.”

Jenny believes her new home is haunted, but her husband Sam isn’t having any of it. They argue with their first dinner guests, old friend Lauren and her new partner Ben. Can the dead really walk again? Belief and scepticism clash, but something feels strange and frightening, and that something is getting closer, so they are going to stay up… until 2.22am… and then they will know.

Danny Robins said "I was blown away by the response to the play this summer, both from the critics and our amazing audiences, so I am hugely chuffed to be able to bring the show back so quickly and to this beautiful, historic theatre. Slipping from Autumn into Winter, it feels the perfect time for a ghost story, so I can’t wait to spook a whole load of new audiences at the Gielgud. I’m hoping you’ll laugh, jump, be on the edge of your seat, and then spend the rest of the night talking about whether ghosts exist!”