Everything you need to know about Newsies the musical in London 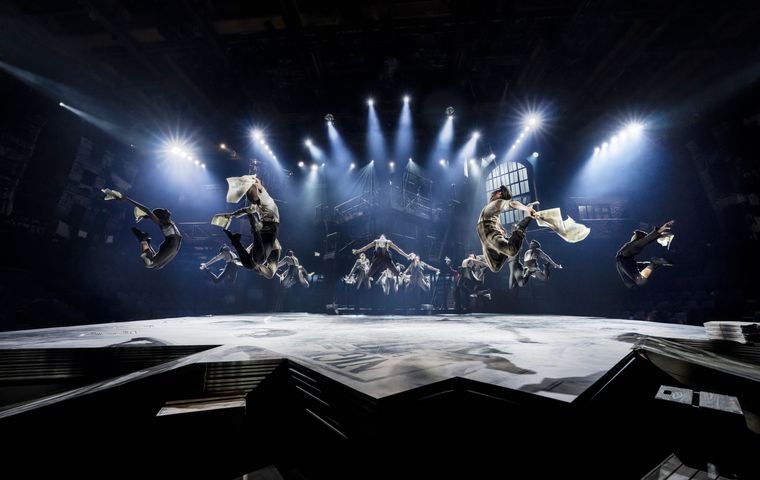 The latest musical sensation to hit London, Disney’s Newsies is a David-and-Goliath style story based on real life events. With its catchy songs and endearing characters, it’s taking the capital by storm. Read all about it!

The Newsies Broadway musical has been one of America’s biggest theatre hits in recent years, and it’s now in London for the first time. The innovative production is performed ‘in the round’, and puts audiences right at the heart of the action, enabling them to experience the story of the New York newsies in a brand new way.

It’s the turn of the 20th century in New York City, and in the wake of the Spanish-American War, teenage newspaper sellers are struggling to make ends meet. Joseph Pulitzer, owner of the New York World, is refusing to make the price of his newspaper bundles competitive, which means the newsies are struggling to sell their papers – and often going hungry.

Enter Jack Kelly, a charismatic and headstrong character, who rallies his fellow newsies to protest against the situation. Together the ragtag band rises up against their exploitation at the hands of wealthy publishing tycoons, fighting for justice and finding friendship along the way.

Who’s in the cast?

The role of Jack Kelly is played by Michael Ahomka-Lindsay, a graduate of the Royal Conservatoire of Scotland and winner of the Andrew Lloyd Webber Foundation scholarship. Michael has appeared in productions of Rent, The Lion, The Witch and the Wardrobe, and Legally Blonde.

Playing Jack’s love interest, reporter Katherine Plumber, is Bronté Barbé. Bronté has starred in productions of Beautiful and Shrek: The Musical, as well as appearing in TV shows such as Years and Years and Call The Midwife.

Newspaper tycoon Joseph Pulitzer is played by seasoned theatre actor, Cameron Blakely. Cameron has appeared in a host of Shakespeare productions, as well as taking prominent roles in Les Misérables in the West End and Oliver! at the Watermill Theatre.

Opening on Broadway in 2012, Newsies was initially slated to play just 100 performances. But such was its success, it went on to play over 1,000 performances, before going on tour and scooping two Tony Awards, including Best Original Score. So far, it’s proving popular in London too, with the original run being extended from February to April 2023.

Where can I see it?

The Newsies play is at the Troubadour Wembley Park Theatre until 16 April 2023. Just a short walk from Wembley Park tube station and accessible via the M25 and M1, it’s easy to reach by both rail and car. The theatre is located at the former Fountain Studios, which was famous for hosting The X Factor. The show runs for two hours and 30 minutes, including an interval.

If you love musicals and want to experience one in a whole new way, don’t miss out on this fantastic production – book your Newsies tickets today.