Introducing the Cast of 2:22 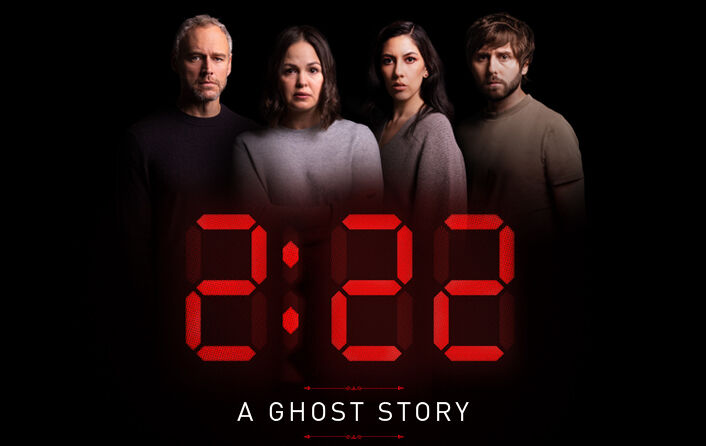 What would you do if you’d just moved into a new home and started experiencing strange happenings?

Married couple Sam and Jenny are at odds with each other over what is going on under their roof when it comes to activity of a paranormal nature. Jenny is convinced that the ghost appears at 2:22am but practical Sam is more sceptical. When couple Lauren and Ben come for dinner, Jenny invites them to stay to see for themselves whether or not the house is truly haunted, making for an evening of questions. What happens when we die? Is there life after death?

Looking to watch an exciting ghost story show with your friends? Come and see '2:22 A Ghost Story' and book your London theatre show tickets now!

Featuring a stellar cast, this modern, slick production of a ghost stories play will have you questioning do ghosts really exist?

Directed by Olivier-nominated Matthew Dunster, this is a scary story you don’t want to miss.

Podcast host, author, blogger, vlogger, presenter, actor and mum of three, Giovanna has written numerous books both fiction and non-fiction. Following the huge success of her book Happy Mum, Happy Baby: My Adventures into Motherhood a podcast was launched in the same name and has over 16 million downloads to date. With husband Tom Fletcher, Giovanna has written a series of books, two of which have been Sunday Times bestsellers. TV and film credits include: The Savages and The Boat that Rocked. Theatre credits include: Backbeat (The Citizens’ Theatre), Ivanov (Donmar Wyndhams Season), A Christmas Carol (Lyceum with LMTO) and The Christmassaurus (Hammersmith Apollo). Giovanna also won the popular ITV show I’m a Celebrity Get Me Out of Here in 2020.

No stranger to the stage, James returns to the west end having made his debut twenty years earlier in Les Miserables as a child.

Argentinian-born Stephanie is best known for her role as Rosa Diaz, a detective on the Golden Globe winning comedy series Brooklyn Nine-Nine. She then went on to work with acclaimed composer, director and producer  Lin-Manuel Miranda, taking on the lead role in Disney’s animation Encanto, as well as the role of ‘Carla’ in In the Heights, a film adaptation of Miranda’s broadway musical.

If scary ghost stories are your thing, you can book tickets to see this thriller of a show and see for yourself whether or not there truly is a 2:22am ghost!