Introduction to the cast of Newsies 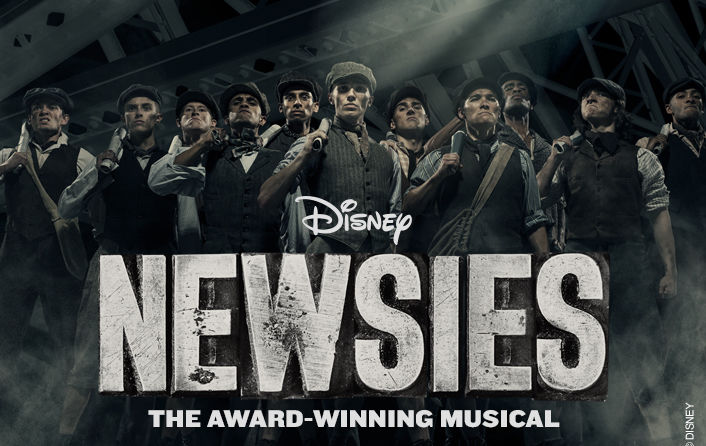 Based on a true story, Disney’s Newsies tells the tale of a ragged band of teenage newspaper sellers at the turn of the 20th century. When newspaper magnate Joseph Pulitzer puts the up price for a bundle of his papers, Jack Kelly wants change. He rallies his fellow newsies and they rise up against the exploitation, seeking justice using the only power they have – solidarity. Along the way, Jack falls in love with Katherine, a young reporter.

The Newsies Broadway musical comes to London from 29 November 2022 to 19 February 2023. Winner of two Tony Awards, it’s an innovative and immersive production performed ‘in the round’, and welcomes audiences to the heart of the action in the streets of New York City. Let’s meet some of the key cast members.

Trained at the Royal Conservatoire of Scotland, Michael received the Andrew Lloyd Webber Foundation scholarship and is a member of the National Youth Theatre. He was also the RCS Nominee for the Stephen Sondheim Student Performer of the Year Award 2020. After graduating, Michael starred as Benny in Luke Sheppard’s production of Rent at the Hope Mill Theatre before touring as Maugrim in The Lion, The Witch and The Wardrobe. He then played Emmett in Legally Blonde at the Regent’s Park Open Air Theatre.

Bronté trained at Mountview, where she received the Gyearbuor Asante Prize for Acting. She appeared on the BBC series Over The Rainbow and was selected for the final 10 in Andrew Lloyd Webber’s search for Dorothy. Since then, she has starred as Carole King in the UK tour of Beautiful, as well as playing Princess Fiona in the UK tour of Shrek: The Musical. Bronté has also appeared as Lucille in the BBC’s Years and Years, and as Janet Romaine in Call The Midwife.

Cameron has extensive experience in theatre, and his roles include two years as Thenardier in Les Misérables in the West End. He also played Smee in Stiles and Drewe’s Peter Pan at the Adelphi Theatre, and Fagin in Oliver! at The Watermill Theatre. He has appeared in a host of Shakespeare productions including Hamlet, Romeo and Juliet, and Othello. More recently, he played Gomez Addams in the UK tour of The Addams Family.

Moya made her Broadway debut in Disney’s The Lion King, and went on to play Effie White in Dreamgirls, for which she received the LA Ovation Award for Lead Actress in a Musical in 2016. In the same year, she was a semi-finalist in America’s Got Talent. Her West End debut saw her reprise the role of Effie White, before she returned to The Lion King in late 2021, also in the West End.

Don’t miss the award-winning Newsies play, which is playing at the Troubadour Wembley Park this season. Book your tickets today!