Introduction to The Tiger Who Came to Tea Cast 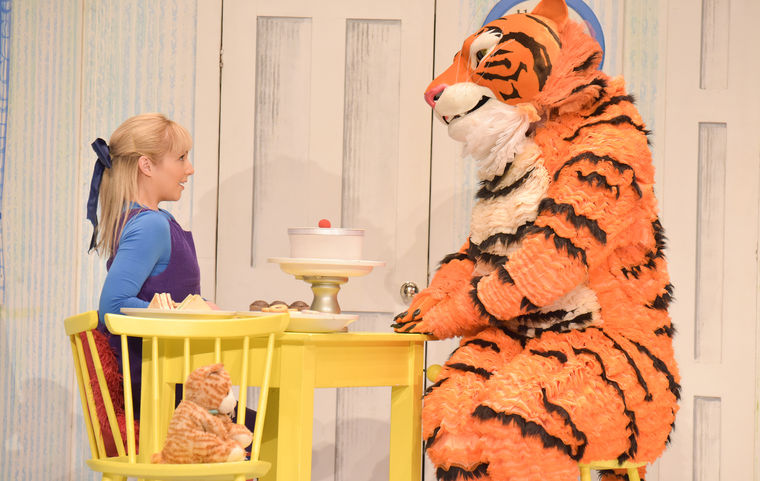 Based on the much-loved children’s book by Judith Kerr, The Tiger Who Came to Tea is one of the best London theatre shows for kids this summer. Packed with oodles of magic, clumsy chaos and sing-along songs, this show runs for 55 minutes with no interval and has been specifically produced for young children. So let’s take a closer look at the West End cast who will be bringing to life the story of a very greedy tiger and a very shocked little girl.

Having recently graduated with Distinction in Music Theatre at the Royal Central School of Speech and Drama, Jenifer will be bringing her talents to the stage as Sophie. When the tiger comes for tea, it’s Sophie and her Mummy’s house that he visits. And Sophie is mesmerised by his actions, watching as he eats and drinks everything he possibly can. Addey’s theatre credits to-date include Tess of the D’Urbervilles (The Other Palace, London; Theatre Royal, Winchester), Catch Me (Royal Centre School of Speech and Drama) and the pantomimes Aladdin and Dick Whittington at Blackfriars Theatre & Arts Centre. With confidence and plenty of charisma, Jenifer is a welcome cast addition.

Originally from Brixham, Devon, Katie moved to London to pursue her acting career. She studied at Bird College, graduating with a degree in Professional Dance and Musical Theatre and has gone on to enjoy a successful and varied career which will now include the role of Mummy in The Tiger Who Came to Tea tour 2022. Katie’s recent credits include Gran in Abbie Ayre and the Shed of Science, Miles in Miles the Mole, Jo in Streetwise (all for PiE) and Belle in Scrooge (Image Musical Theatre). Katie has also appeared as a dancer on Ant and Dec’s Saturday Night Takeaway.

Making his professional debut with The Tiger Who Came to Tea, James will be taking on multiple roles including Daddy, Milkman, Postman and the Tiger himself. Having trained at Guildford School of Action and The BRIT School, James has enjoyed many credits while training, including Captain E. J. Smith in Titanic, Ben Weatherstaff in The Secret Garden and Illyrian Office/understudy Malvolio in Twelfth Night.

Benjamin Stone brings plenty of experience to the cast having been part of the International tour of The Tiger Who Came to Tea. Since graduating from Chichester Conservatoire’s Triple Threat course with a First Class Honours in Musical Theatre, Benjamin has performed in many productions including The Wind in the Willows at the Trinity Theatre.

Tia is thrilled to be returning for her second tour with The Tiger Who Came to Tea, after making her professional debut in 2021. Acting since the age of three, Tia went on to train at Midlands Academy of Dance and Drama on the 3 Year Professional Musical Theatre Diploma.

As one of the best West End shows, The Tiger Who Came to Tea is certainly worth enjoying with the whole family. Book your kids show tickets today and make memories to last a lifetime.

The Tiger Who Came to Tea - London