The story behind Newsies 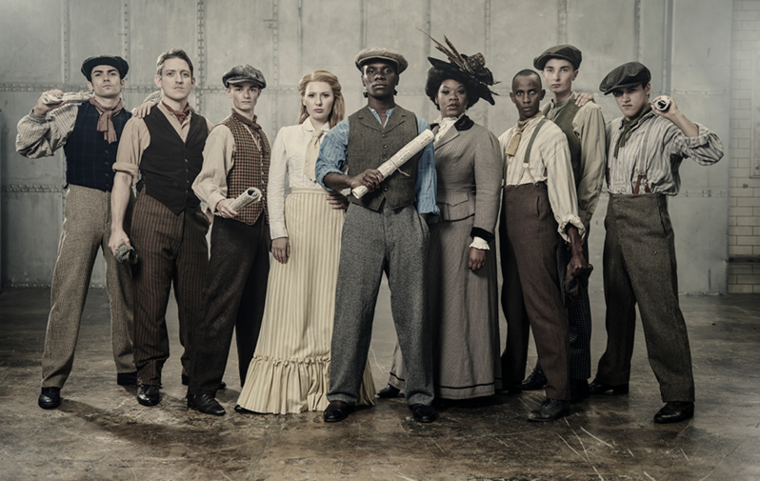 Coming to London this November, the Newsies musical tells the story of Jack Kelly and his ragtag band of fellow newsies, who rise up against newspaper moguls in a battle over fair wages. Innovative and immersive, this historical musical will be performed ‘in the round’ at the Troubadour Wembley Park Theatre, putting the audience right at the heart of the action on New York City’s Streets.

The show is based on the true story of the 1899 newsboy strike, in which a band of newspaper boys, some as young as seven, took on the wealthy moguls William Randolph Hearst and Joseph Pulitzer. Let’s take a look at the true events of the strike.

The real story of the newsies

At the end of the nineteenth century child labour was widespread in America, and no restrictions existed to govern their work. Child workers therefore had to fight for their own rights, and in 1884, newsboys – kids who stood on street corners selling the papers by shouting out their headlines –  began to strike in order to improve working conditions for themselves. Often the strikes failed, but in 1899 everything changed.

The Spanish-American war of 1898 had led to a rise in the price of a bundle of 100 papers from 50 cents to 60 cents – that’s an increase from around $18 to over $21 in today’s money. When the war ended, most newspaper companies dropped their price back to 50 cents, with the exception of Joseph Pulitzer’s New York World and William Randolph Hearst’s New York Evening Journal. As a result, interest in the papers declined and the newsboys began to struggle to sell them, which in turn meant they could barely afford to buy enough papers to survive.

After a six-month struggle, the newsies were feeling the pinch. On 18 July 1899, a group of Long Island City newsies discovered that a Journal delivery man had been selling them bundles with fewer than 100 papers in. Furious, they tipped over his wagon and stole the papers. The next day, they agreed to boycott the World and the Journal, until Hearst and Pulitzer agreed to reduce the price of a bundle to 50 cents.

At first, the strikes were ignored, but more and more newsies joined the protest, marching across the Brooklyn Bridge and tearing up any copies of the papers that were being sold by other newsstand owners. In a matter of days, the World’s circulation dropped from 360,000 copies to just 125,000, and 5,000 newsboys were taking part in the strike. Led by Louis ‘Kid Blink’ Baletti, they earned the support of the public, forcing the moguls to offer a deal: bundles would stay at 60 cents per 100, but both the World and the Journal would buy back any unsold papers at full price.

The boys agreed, and went back to selling their papers. In the wake of the strike, similar action took place in other cities across America and finally, twenty years later, the United States enacted child labour laws.

The story of newsboys taking on rich and powerful newspaper moguls endured, and the Newsies Broadway production was hugely successful, winning two Tony Awards and drawing thousands of theatre goers. Don’t miss the chance to be part of the action – book your tickets today.