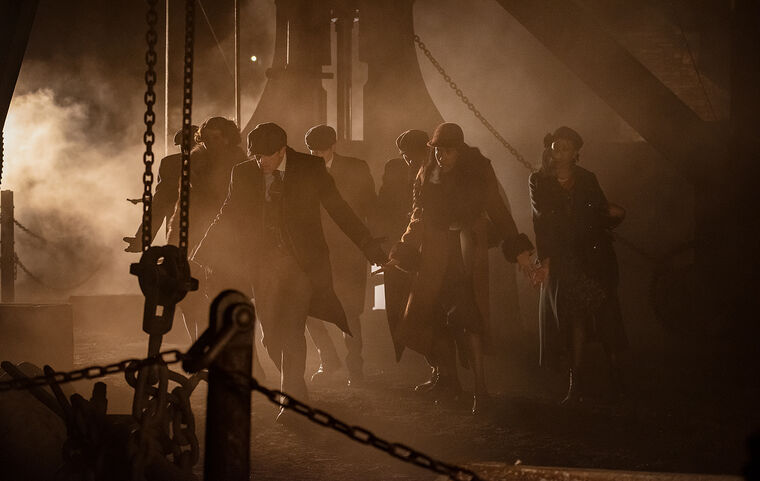 With plot twists, hard nuts and violence galore, gangster shows transport you to an underworld of crime, black market deals and no-good alliances. They’re gripping, entertaining and designed to get your adrenaline soaring. So let’s check out six of the best gangster TV series in the UK.

Thomas Shelby and his family run the most-feared and powerful local gang, the Peaky Blinders. Dominating the streets of Birmingham in 1900s England, the gang is named for its practice of sewing razor blades into the peaks of its members’ caps. They go about making money from illegal betting, protection and dark dealings. Created by Stephen Knight, Peaky Blinders crime play is now showing as a theatre event in Wembley.

For twenty years, Finn Wallace, was the most powerful and feared criminal in London with billions of pounds flowing through his underground organisation each year. But when he’s killed, it’s up to Sean Wallace and the Dumani family to take his father’s place in what is now a very dangerous situation. Sean’s assumption of power causes ripples throughout the world of international crime, and within the streets of London, as rivals move to assert their authority.

Alex Godman, the British-raised son of a Russian mafia boss living in London, has spent his entire life trying to avoid the shadow of his family’s criminal past, but when tragedy strikes, he’s drawn into the dark, turbulent and unpredictable world of international crime. He must now do whatever it takes, including confronting his own values, to protect the ones he loves. This award-winning series is sure to have you on the edge of your seat.

Two seasoned drug dealers return to the gritty streets of London to ply their lucrative trade on the crime-filled Summerhouse estate. Dushane and his friend Sully strive to become the richest and most powerful men on the block, but with some fierce rivalry to contend with, it’s not a smooth ride. Thirteen-year old Ra’Nell also gets lured into the gang and drug business as his mother has a breakdown and is hospitalised - with devastating consequences.

With plot twists, gangs and a psychopathic assassin, Killing Eve has it all. Eve Polastri, a former MI5 Security Officer and MI6 Agent, is the protagonist who spends her days investigating the international assassin, Villanelle, and the organisation she works for known as The Twelve. As she gets closer, Eve and Villanelle develop a mutual obsession with one another which leads to Eve almost being killed more than once.

Renowned for working with notorious London gangsters and the scum of the underworld, John Luther is a police detective with nerves of steel. He deals with murder cases, often involving serial killers and has a knack for getting inside the minds of those he targets. However, his methods, personality and troubled private life often get him into trouble with fellow officers.

If you love anything to do with gangsters, don’t miss the Peaky Blinders production now showing at Troubadour Wembley Park Theatre, Wembley, UK. Book your tickets today.