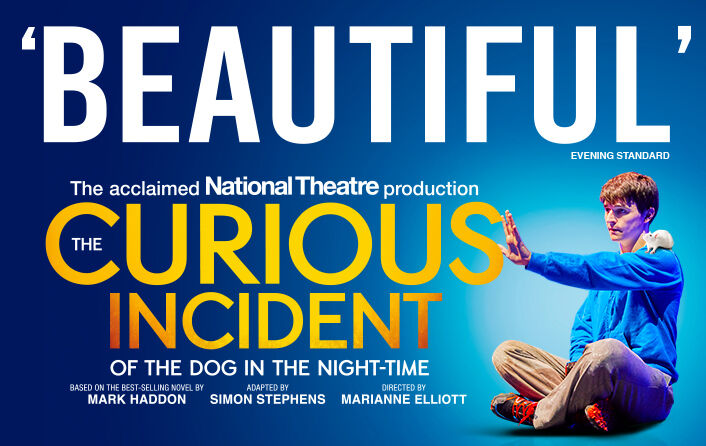 Crime fiction shows have fascinated audiences on screen and on stage for centuries.

Now for a limited time only The Curious Incident of the Dog in the Night-Time, one of the best plays in London returns for an exclusive run at Troubadour Wembley Park Theatre. A mystery play full of twists, turns and a dead dog, this show is sure to delight anyone who is a fan of a crime fiction play or a crime fiction show.

You can buy theatre tickets to one of the most imaginative of journeys that London theatre shows have to offer right here.

Adapted from one of the best crime drama novels to come out of modern literature, the award-winning production of the National Theatre’s The Curious Incident of the Dog in the Night-Time centres around, well, a curious incident, which takes place in the life of Christopher - a young person whose world is shaken by the accusation he had murdered his neighbour’s dog.

Here are our favourite top five quotes from the award-winning production which shows a new perspective on life through the mind of a someone who struggles to understand his place amongst his community, and uses the unusual way he processes the world around him to find out the truth.

1.“It was seven minutes after midnight. The dog was lying in the grass in the middle of the lawn in front of Mrs shears house its eyes were closed it looked as if it was running on its side the way dogs run when they think they’re chasing a cat in a dream. But the dog was not running or a sleep. The dog was dead.”

There it is. The crime itself right there, ready for you to join Christopher and get your brain ticking over as he pieces together the mystery surrounding the dead dog.

There’s never been a more appropriate time for us to carry on the important conversation of the impact of mental health, and particularly being open about mental health not only with professionals but also with family and friends. This production sensitively explores the loneliness that those with mental health struggles face.

3. “I’m not a very good mother Christopher. Maybe if things had been different, maybe if you’d mean different, I might have been better at it. But that’s just the way things turned out.”

Bereaved of his mother, Christopher struggles to understand the pain that comes with the loss of such an important figure in his life. It’s a difficult topic to acknowledge but this show encourages us all to understand and reflect on our own experiences of grief and bereavement.

4.“…I sometimes pretend at night in summer when I go and lie on the lawn and look up at the sky and I put my hands around the side of my face so that I can’t see the fence and the chimney and the clothes line and I can pretend I’m in space.”

There’s often a perception that children and young people with SEN are unable to express their creativity; often being locked into routines. With stunning visuals, sound and lighting,  you’ll be taken on a journey to solve the crime through Christopher’s vibrant thought process and imagination.

5. “…So I made a decision. I decided to do some more detection. I decided to go out on my own. I do not like strangers. So talking to the other people in our street was brave. But if you are going to do detection work you have to be brave, so I had no choice.”

For young people like Christopher the world can be a frightening and confusing place even on a day to day basis, so requires a lot of bravery to get through the day. It’s also a strong reminder that small things we take for granted may be a struggle for others around us.

The best of the mystery plays theatre has to offer, this critically-acclaimed crime fiction show, The Curious Incident of the Dog in the Night-Time plays at Troubadour Theatre Wembley Park until 9 January 2022.

Please note: There is some strong language in this production, as there is in the novel. This occurs at the very beginning of the show and infrequently at other points during the show.

Want to watch an exciting crime mystery show with your friends? Come and see The Curious Incident of the Dog in the Night-Time.

The Curious Incident of the Dog in the Night-Time