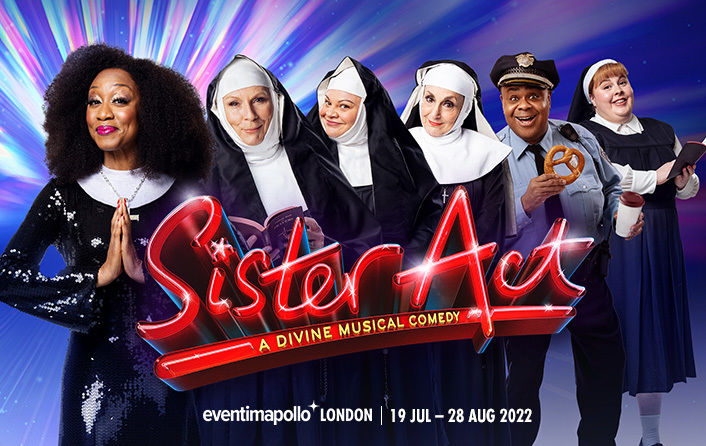 Brace yourself sisters for this sparkling tribute to the universal power of friendship, sisterhood an music. Sister Act tells the hilarious story of Deloris whose life takes a surprising turn when she witnesses a murder. Under protective custody she is hidden in the one place she won’t be found – a convent! Disguised as a nun and under the suspicious watch of Mother Superior, Deloris helps her fellow sisters find their voices as she unexpectedly rediscovers her own.

Featuring original music by Tony® and 8-time Oscar® winner Alan Menken (Disney’s Aladdin, Enchanted), dazzling dance routines and songs inspired by Motown, soul and disco, this is one nostalgia-filled trip that you will never forget. Join our congregation at Eventim Apollo London and Raise Your Voice for the feel-good theatrical event of the summer.

*Please note that Beverley Knight will not be performing on Sunday 24th July, Tuesday 26th July and both performances on Thursday 28th July.

As the safety of customers is always thew venues main priority they have increased security measures which affects bags that can be brought into the venue.

All bags will be searched upon entry to the building and they've introduced a strict clear bag policy so they can carry out security screening contact-free. Only one reasonably-sized see-through bag is allowed per person.

Please avoid bringing large bags or suitcases to events as the cloakroom is currently closed and they will not be able to store them. Please do not leave any of your belongings unattended.

The venue has multiple bars selling alcohol, soft drinks and snacks.  They do not have a restaurant or sell hot food but there are plenty of places to buy dinner in the local Hammersmith area.

The Eventim Apollo is now cashless to speed up sales, reduce our customers’ waiting time and limit contact between staff and guests.