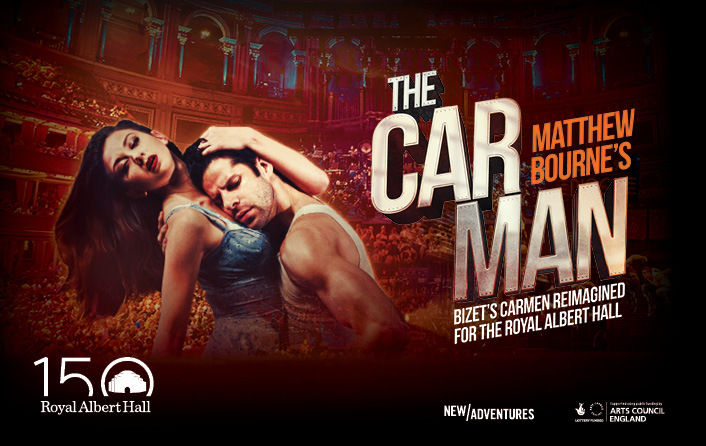 Fasten your seat belts – The Car Man is back!
In a spectacular new staging for the Royal Albert Hall’s 150th anniversary

To celebrate the Hall’s 150th anniversary, Matthew Bourne and his acclaimed dance company New Adventures bring their multi-award-winning production of The Car Man to the Royal Albert Hall for the very first time.

A dance-thriller based on Bizet’s beloved Carmen, The Car Man will be completely reimagined for the gladiatorial arena of the Royal Albert Hall, adding a frisson of danger as the dancers perform throughout the auditorium amid stage designs by Olivier and Tony award-winner Lez Brotherston.

Featuring an expanded company of 65 dancers and musicians, a live orchestra and epic new designs, these 14 performances of The Car Man are a unique opportunity to see this extraordinary production as you’ve never seen it before. The 19th Century Spanish cigarette factory becomes a greasy garage-diner in 1960s America where a small-town’s dreams are shattered by the arrival of a handsome stranger. Fuelled by heat and desire, the inhabitants are driven into an unstoppable spiral of greed, lust, betrayal and revenge.

Matthew Bourne’s vivid storytelling combines with one of the most passionately dramatic scores ever written, with musical arrangements by Terry Davies featuring Rodion Shchedrin’s Carmen Suite (after Bizet’s Carmen), to create a dance event like no other.

The Car Man will ignite your senses and leave you breathless – don’t miss it in summer 2022.

of 03
Venue
Royal Albert Hall
Running Time
TBC
Tickets From
£31.16
Age Recommendations
No under 12s. All customers aged 14 years or below must be accompanied by an adult aged 18 years or over
Latecomer Policy
TBC

Group Tickets are avaliable directly from the venue. For more details and to book, please call the Royal Albert Hall Box Office on 020 7589 8212

The Royal Albert Hall is a concert hall on the northern edge of South Kensington, London. One of the United Kingdom's most treasured and distinctive buildings, it is held in trust for the nation and managed by a registered charity which receives no government funding. It can seat 5,272.

South Kensington and High Street Kensington are the closest underground stations to the Royal Albert Hall. It takes approximately 10-15 minutes to walk here from either station. The nearest underground station offering step-free access from street to train is Green Park – you can take the number 9 bus to the Hall from there. Victoria and Paddington are the nearest National Rail stations, each are an approximate 30 minute walk away but offer tube and bus connections.

Yes, your bag will be searched by members of our Security team. This will be a condition of entry and we advise you to bring as few items as possible.

Yes, you'll be able to leave your belongings in our cloakroom if you so wish. However, please avoid bringing large bags as we might not be able to store them.

No, the venue has moved to cashless payments only throughout the building. By which we mean contactless or card.