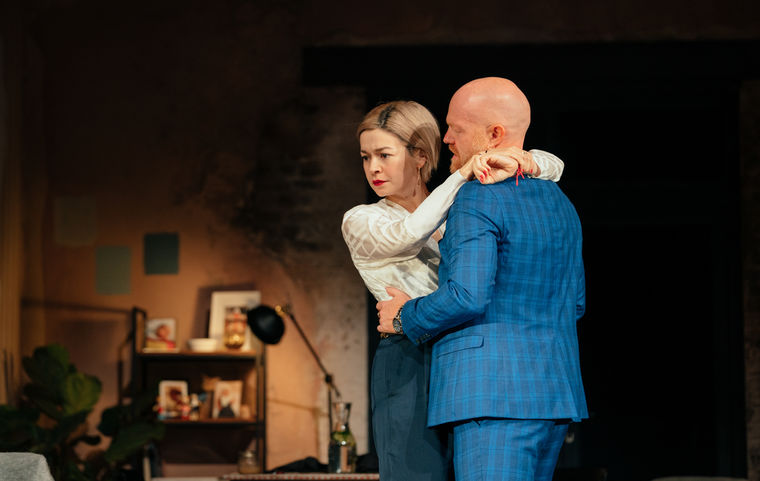 An award-winning supernatural thriller, 2:22 – A Ghost Story, has returned to the West End, delivering edge-of-your-seat excitement to audiences at the Criterion Theatre, Piccadilly. Written by award-winning writer Danny Robinson, who created the BBC podcast The Battersea Poltergeist, it’s ghost story theatre at its best, full of intrigue and mystery as well as humour.

Jenny believes her new home is haunted. At exactly 2:22am each night she hears someone moving around, often via the baby monitor in her child’s bedroom. But her husband Sam isn’t convinced and offers alternative explanations. When they host their first dinner party with their friends Lauren and Ben, the four argue…and something feels strange and frightening. The only way to be sure if Jenny is right is for them all to stay up until 2:22am.

This adrenaline-filled night reveals plenty of secrets – but will ghosts appear? Featuring an all-new cast, it’s an exciting ghost experience you won’t forget in a hurry. Let’s meet the new cast members.

Trained at the Leinster School of Music and Drama, Laura Whitmore studied Shakespeare at RADA and began a successful career in radio and television in 2008. She hosts the BAFTA winning ITV show Love Island and a BBC radio show, as well as presenting the I’m a Celebrity… spin-off. In 2022 she became a Sunday Times best-selling author, with her paperback No One Can Change Your Life Except For You launching in June 2022. The role of Jenny is her West End debut.

Felix Scott has enjoyed a successful career in theatre and television, with his stage credits including Ralph Nickelby in Nicholas Nickelby (Lyric Theatre), Craver Perry in In the Heart of America (Gielgud Theatre) and Vincent in Women, Power & Politics (Tricycle Theatre). He has appeared in TV shows such as The Crown, Grantchester, Wolf Hall and Doc Martin, and his film credits include The Nan Movie, The Sound of Philadelphia, , Baghdad in my Shadow, Inception and Artifacts.

Originally from Sydney, Australia, Tamsin Carroll is no stranger to the West End. She has played Nancy in Oliver! and featured in Everybody’s Talking About Jamie (both West End productions), as well as working on Twelfth Night and Into The Woods for the Melbourne Theatre Company, and Harbour and The Republic of Myopia for the Sydney Theatre Company. She has also made appearances in Eastenders and Heartbreak High, as well as playing Jodie in Jane Campion’s Holy Smoke.

Matt has been acting from a young age, but is perhaps best known as a member of Busted, one of the biggest pop bands of the early noughties. As part of the group, he had four Number 1 hits and won two Brit Awards. His theatre roles include Bob Cratchit in A Christmas Carol (Dominion Theatre), Chuck Cranson in Footloose (UK tour) and Nick Hurley in Flashdance (Shaftsbury Theatre). He has also appeared in The Witcher, Eastenders, Casualty, and Birds of a Feather.