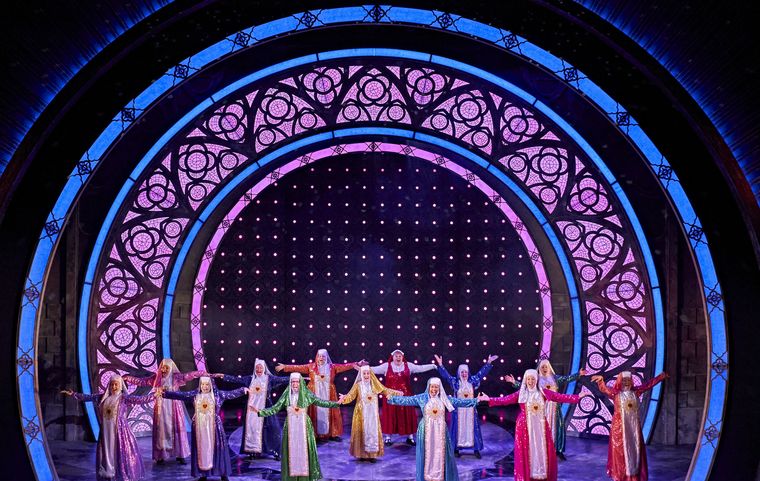 The Sister Act theatre show has arrived in London, telling the story of Deloris Van Cartier, who is put into witness protect in a convent after seeing her boyfriend commit a murder. Disguised as a nun, she soon begins helping her fellow sisters to find their voices, and in doing so wins over the community – and even the Pope! This hilarious, sparkling musical is showing now at the Eventim Apollo, London, so be sure to book your tickets today!

In the meantime, let’s take a look at the five main characters of the Sister Act show.

Deloris Van Cartier is a singer in Reno, Nevada, when she witnesses her boyfriend murder an informant. For her protection, she’s placed in Saint Katherine’s Convent in San Francisco, where she’s given the identity of Sister Mary Clarence. A rebellious spirit, Deloris struggles with the rigid rules of the convent, but her warm personality and cheeky charm win over the nuns, who get themselves into all sorts of adventures as a result.

Mother Superior is the abbess at the convent, and is an old fashioned leader, who regards Deloris with distaste. Despite her prickliness and strict nature, she has a kind heart, and cares deeply about the welfare of the nuns and Deloris’ impact on it. When Deloris is kidnapped by her boyfriend’s henchmen, she readily agrees to help rescue her, and ends up discovering her own adventurous side.

Sister Mary Patrick is one of the first nuns to welcome Deloris to the convent. She’s a bubbly, cheerful character whose boundless optimism keeps the other sisters positive. Her excitable nature and mischievous streak leads her to follow Deloris to a bar, and her love for singing and dancing gives the choir and their work in the community energy and verve.

A senior member of the convent, and initially the choir director, Sister Mary Lazarus at first seems rather grumpy. But beneath her gruff exterior are warmth and humour. She responds positively to hard work and enjoys getting the choir on form under Deloris’ direction. There’s a liveliness to her which comes out as the choir’s new style draws in a larger congregation, and she’s among those who vote for them to perform the new programme to the Pope, instead of the traditional hymns.

Eddie Souther is the police officer in charge of ensuring Deloris is kept safe in witness protection, and is a confident, diligent character. He gets frustrated with Deloris putting herself at risk by calling him from the convent and going out into the community, but is nevertheless fond of her and attends the church services at which the choir performs.

If you want to celebrate the power of music with Sister Act, you can book your London play tickets today. Playing between 19 July and 28 August, it’s a fabulous production with an all-star cast.

At the Eventim Apollo
Brace yourselves Sisters!
More info